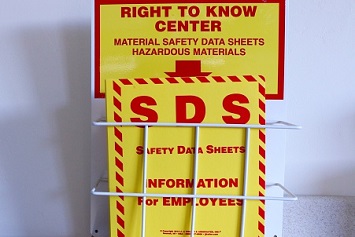 Under OSHA’s Hazard Communication Standard ((HCS), 29 CFR 1910.1200(g)), these entities must provide an SDS for each hazardous chemical to downstream users to communicate information on the hazards. An SDS includes information such as the properties of the hazardous chemicals; the physical, health, and environmental health hazards; protective measures; and safety precautions for handling, storing, and transporting the chemical.

The letter of interpretation responds to questions a company asked about Section 3 of the SDS, which requires information on the ingredients contained in the product indicated on the SDS. For mixtures, Section 3 states that the responsible entity must provide the chemical name and concentration (i.e., exact percentage) of all ingredients that are classified as health hazards, that are present above their cutoff/concentration limits, or that pose a health risk below the cutoff/concentration limits. The Section adds that the exact percentage of each ingredient must be specified; however, concentration ranges may be used if a trade secret claim is made, there is batch-to-batch variation, or the SDS is used for a group of substantially similar mixtures.

The questioner was primarily concerned about the extent of trade secret protections applicable to percentages of ingredients. In its response, OSHA made the following points:

OSHA’s letter also answers several questions about how to fill out SDSs when the exact chemical concentrations are not known and about grouping together multiple ingredients that have similar hazards.