The U.S Coast Guard (USCG) has eliminated the requirement that nonrecreational vessels operating on voyages exclusively within a single Captain of the Port (COTP) Zone submit an Annual Ballast Water Summary Report covering calendar year 2018. The required reporting was part of a 2015 rule that directed vessel owners and operators to submit annual reports for 2016, 2017, and 2018 by March 31 of the following years respectively (i.e. reports that covered 2016 had to be submitted by March 31, 2017) (November 24, 2015, Federal Register (FR)). 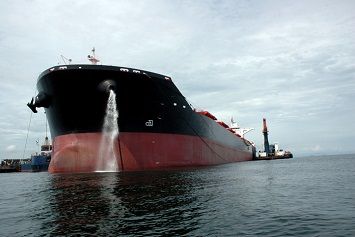 Reports for 2016 and 2017 were submitted to the USCG. But based on information in those reports, the USCG decided that the information it received makes no meaningful contribution to its analysis and understanding of ballast water management (BWM) practices. Accordingly, the final rule eliminates the reporting requirement covering 2018. The USCG estimates that the reporting rule covered 278 vessels; this contrasts with the 1,280 vessels the USCG estimated would be reporting in the 2015 rule.

A COTP Zone is a predefined area, usually comprising multiple ports and U.S. waterways in which a USCG officer oversees compliance with regulations.

In comments, vessel owners supported the USCG’s proposed elimination of the third-year reporting requirement (May 9, 2018, FR). However, the proposal was opposed by the Hawaii Department of Land and Natural Resources, which said the annual summary reports provided valuable information about the state’s unique COTP Zone, which comprises “a vast and ecologically diverse expanse of the Pacific Ocean.”

A Record of Ballast Loadings and Discharges

Under the Nonindigenous Aquatic Nuisance Prevention and Control Act of 1990, as amended by the National Invasive Species Act of 1996, the Department of Homeland Security, which includes the USCG, must ensure, to the maximum extent practicable, that aquatic nuisance species (ANS) are not discharged from vessels into waters of the United States. In the 2015 final rule, the USCG said the annual summary reports would help in obtaining a better understanding of BWM practices that control invasive species in vessels that were previously exempt from reporting. The annual reports contain information about the vessel, the number of ballast tanks on board, total ballast water capacity, and a record of ballast water loadings and discharges.

Based on its review of reports already received, the USCG agreed with commenters who said the reports were an unnecessary burden.

“We have concluded that the annual reports do not effectively contribute to the quality and breadth of BWM data to the extent necessary for us to determine whether there are any ill effects,” the USCG states. “The information called for in the report is a simplistic summary of discharges rather than detailed information on the volume, number, and location of discharges. This level of detail is insufficient to determine whether this population of vessels presents a threat of spreading [aquatic nuisance species] and … we are unable to improve the reporting fields before the reporting requirement expires.”

The USCG adds that elimination of the reporting requirement does not relieve vessel owners of their obligation to manage ballast water. The USCG notes that there are multiple other sources of information about BWM practices. Furthermore, the USCG states that it intends to consider developing a rule that would require vessel owners to report more valuable information.

In its comments, the Hawaii Department of Land and Natural Resources notes that Hawaii is the only purely archipelagic state in the United States.

“Unlike other states, each county in Hawaii is separated by deep channels of open ocean,” stated the Department. “This means that the only vector for most aquatic invasive species [AIS] transitioning between the islands is through vessel ballast water and biofouling. The proposed amendments seek to eliminate the only ballast water reporting requirement imposed on vessels traveling inter-island within the State of Hawaii, and thus, the only information we have to rely on in understanding the movement of AIS between the islands through this vector.”

The USCG responded that it did not agree that the annual reports were the only sources of information available to assess ballast water movement. However, the USCG added that the Department’s comments “caused us to reexamine how we describe COTP Zones for purposes of ballast water regulations intended to prevent the discharge of ANS into waters of the U.S. from vessels.”