Female nurses who give cancer patients their medications don’t always wear gloves or gowns to protect themselves from hazardous drugs, according to a new National Institute for Occupational Safety and Health (NIOSH) study. 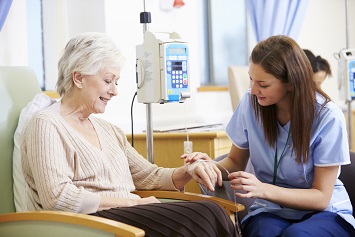 When nurses administer chemotherapy in pill or liquid form (in an intravenous drip, for example) to patients diagnosed with cancer, the nurses are exposed to hazardous drugs known as antineoplastic drugs.

While these drugs are vital for cancer patients—the drugs kill rapidly dividing cancer cells—the drugs also can threaten a nurse’s healthy cells, as well as the cells of a developing baby.

The effects of these hazardous drugs include:

The NIOSH study found that nurses—including those who were pregnant—reported not wearing protective gloves and gowns, the minimum protective equipment recommended when administering these drugs.

Researchers from NIOSH and the Harvard T.H. Chan School of Public Health, Harvard Medical School, and Brigham and Women’s Hospital in Boston, Massachusetts, collected survey data from some 40,000 American and Canadian nurses participating in the Nurses’ Health Study 3.

In their study of nonpregnant and pregnant nurses, researchers learned that:

Researchers in the NIOSH study could only speculate about the reasons that so many nurses did not use proper personal protective equipment (PPE) when administering hazardous drugs.

Earlier studies have revealed a variety of reasons for lack of safety precautions, including the following:

The NIOSH study was published online by the American Journal of Nursing.

Healthcare employers must meet a number of requirements under the General Duty Clause of the Occupational Safety and Health Act, OSHA’s hazard communication standard, as well as several industry standards. These requirements include: