In 2013, the U.S. Chemical Safety and Hazard Investigation Board (CSB) reported on an explosion and fire that occurred in 2011 at a fireworks disposal magazine in Hawaii in which five personnel were killed. According to the CSB, the use of equipment that could cause a spark likely ignited black powder that had accumulated inside the magazine. The CSB recommended that multiple parties—including the company running the operation; the National Fire Protection Association; and the Bureau of Alcohol, Tobacco, Firearms and Explosives—take actions to reduce the potential for similar incidents. 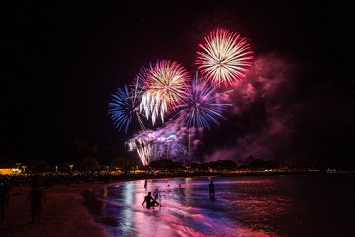 The CSB also reviewed the role of the EPA, which regulates waste fireworks as hazardous waste under the Resource Conservation and Recovery Act (RCRA). The CSB found that the disposal operation was being conducted under a RCRA temporary emergency permit granted by the state of Hawaii. But the CSB said such emergency permits lack safety management provisions that could have prevented the accidental ignition. Accordingly, in a February 2013 letter to the EPA, the CSB made three recommendations, including the following two:

The EPA responded that it agreed with the second recommendation but determined that the relevant Subtitle C regulations are adequate, and the recommended revisions are not necessary. In July 2017, the EPA issued the recommended policy memo.

“Had [the RCRA regulations] been followed (e.g., no metal spark-producing tools and no other metal objects allowed, and explosive dust kept swept off the floor), they would have prevented the accident’s probable causes as identified by the CSB,” said the EPA in its memo. “In short, EPA believes that the issue is not with the regulations, but with their implementation.”

Emergency Permits Must Be Protective

One important issue in these developments is the difference between a RCRA permit and a temporary RCRA emergency permit. While RCRA permits are generally developed over the needed time period, an emergency permit must often be issued immediately, including orally and followed by a written permit within 5 days, and may not exceed 90 days. While acknowledging an accelerated schedule for issuing emergency permits, the EPA did not agree that these permits do not contain requirements to follow the best practices that would have prevented the Hawaii tragedy.

“These permits ‘shall incorporate, to the extent possible and not inconsistent with the emergency situation, all applicable requirements of parts 264, 265, and 270,’” said the EPA. “Because these permits need to be developed in a short timeframe [sic], the permit writer should consider incorporating the requirements and best management practices, as appropriate, in emergency permits that involve explosive waste, to prevent accidental ignition.”

The memo lists three different sets of regulations that permit writers should consider incorporating into both RCRA permits and RCRA temporary emergency permits. Given that the Hawaii incident was essentially treatment of waste fireworks (separation of black powder from the fireworks tubes), we list here the EPA’s applicable regulations for treatment, storage, and disposal facilities (TSDFs):

The EPA’s memo, which includes the CSB letter to the EPA, the EPA’s response, and the relevant RCRA regulations, is here.