The EPA’s Office of Air Quality Planning and Standards recently issued guidance on how information on prescribed fires on wildland may be factored into exceptional events demonstrations required by Section 319(b) of the Clean Air Act (CAA). If the Agency accepts a state’s exceptional event demonstration, air pollution resulting from the event is excluded from data used to determine an area’s attainment or nonattainment under the CAA’s National Ambient Air Quality Standards (NAAQS). 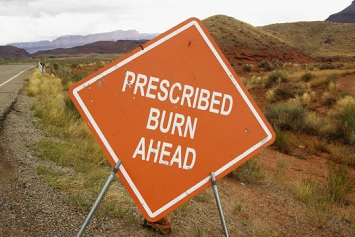 In a 2016 rule, the Agency stated that an exceptional event demonstration must address six elements. For example, the state must provide data that show “a clear causal relationship between the specific event and the monitored exceedance or violation.” The state must also demonstrate that “the event was both not reasonably controllable and not reasonably preventable.” A third criterion, and one particularly relevant to prescribed burns, is that the demonstration must show that the event “was caused by human activity that is unlikely to recur at a particular location or was a natural event.” Unlikely to recur at a particular location is a somewhat slippery term that warrants clarification.

“We measure the 3-year period backwards from the date of the most recent event (e.g.,for an event occurring on May 1, 2016, the 3-year period would be May 1, 2013, through May 1, 2016). [I]f there have been two prior events of a similar type (i.e.,a similar event type generating emissions of the same pollutant whether flagged or the subject of a demonstration) within a 3-year period in ‘a particular location,’ the third event, for which the demonstration is being prepared (or would be prepared), would generally not satisfy the ‘human activity that is unlikely to recur at a particular location’ criterion and, thus, would not qualify as an exceptional event. If an event type has not previously occurred within a given air quality control region in the 3 years preceding the submittal of an exceptional events demonstration for an event that has occurred recently, the EPA will consider this recent event to be a ‘first’ event and will generally consider that event type to be unlikely to recur in the same location.”

The guidance goes on to note that the recurrence provision for a prescribed fire on wildland is intended to reduce the risk of catastrophic wildfire and recognizes that land managers often pursue these benefits through a program of prescribed fires. Other uses of prescribed fires that would fall under the provision include burning of debris for land clearing, agricultural burning, and burning of logging slash on land used for commercial timber sale.

The guidance advises that air agencies that receive exceptional event demonstrations should consult with their EPA regional offices regarding how to characterize a “particular location” for purposes of addressing the “human activity unlikely to recur at a particular location” criterion.

“Ultimately, EPA will determine the bounds for ‘a particular location,’” states the Agency.