In a notice, the EPA is soliciting public comment on the development of a policy to determine when harmful algal blooms (HABs) in freshwater are events of “national significance” and therefore entitled to federal mitigation assistance. 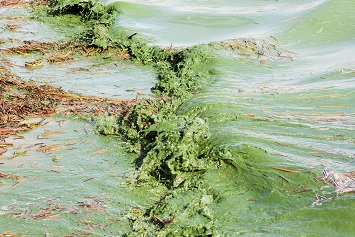 HABs are caused by photosynthetic organisms that, under certain conditions, form large accumulations of algae. In freshwater, cyanobacteria make up the major HAB-forming taxon. Cyanobacteria are microorganisms that can produce harmful cyanotoxinsthat, if ingested in sufficient amounts, can kill fish, shellfish, livestock, and wildlife and can adversely impact human health. Algal blooms can also harm aquatic environments by depleting oxygen needed to sustain freshwater aquatic life, a phenomenon called hypoxia.

In 2014, a large HAB in Lake Erie that contaminated the drinking water for about 500,000 people in Toledo, Ohio, brought the scourge of HABs into the national spotlight, but HABs are hardly a new occurrence. Congress recognized the danger of HABs in 1998 when it passed the Harmful Algal Bloom and Hypoxia Research and Control Act (HABHRCA). The Act empowered the National Oceanic and Atmospheric Administration (NOAA) to advance the scientific understanding and ability to detect, monitor, assess, and predict HAB and hypoxia events. The HABHRCA has been amended three times—most recently in 2018. That action provides NOAA with the authority to make a determination that a coastal or marine HAB or hypoxia event is of “national significance” and therefore entitled to federal assistance to mitigate the detrimental environmental, economic, subsistence-use, and public health effects of the event. The legislation provided the EPA with the same authority for freshwater HAB or hypoxia events.

The most recent legislation indicated that a determination that an HAB is of national significance must be based on at least six factors. Those factors and questions for which the EPA is soliciting comment are as follows:

The EPA says it will consider comments on whether additional criteria should be used to determine national significance. These criteria might include the state’s access to critical resources (e.g., technical expertise); whether the HAB event impacts drinking water; and which information a state should provide to the EPA when requesting determination of an event of national significance.