In a live statement and backed by a coterie of industry leaders and agency heads, President Donald Trump unveiled the administration’s proposal to amend regulations for implementing the National Environmental Policy Act (NEPA), commonly referred to as the NEPA process. Given that the announced action is a proposal and not a final rule and also that a good number of the proposed revisions were already introduced in a June 2018 advance notice of proposed rulemaking (ANPR), it is worth asking why the White House rolled out the document with such fanfare.

The short answer is that industry has long viewed NEPA regulations and their implementation by the Council on Environmental Quality (CEQ)—primarily in the form of environmental reviews of proposed major actions undertaken or funded by the federal government—as obstacles to needed infrastructure improvements. The president endorses this view with enthusiasm, calling the NEPA regulations “job-killing,” “outrageously slow,” and “burdensome,” all in the first two sentences of his address.

“From day one, my administration has made fixing this regulatory nightmare a top priority,” said the president. “And we want to build new roads, bridges, tunnels, highways bigger, better, faster, and we want to build them at less cost.”

The CEQ, which wrote the proposal, calls the action “comprehensive,” and there can be little disagreement that it is. The proposal comprises, by our count, about 60 revisions to or clarifications of the CEQ’s existing NEPA regulations. The proposed actions range from specifying grammatical corrections and what the cover page of NEPA Environmental Impact Statements (EISs) should look like to highly consequential and controversial changes that limit the definition of a major federal action and remove consideration of cumulative and indirect effects from environmental reviews.

To a large extent, cumulative, as it is defined in the NEPA regulations, became a code word for a broad consideration of a proposed project’s impact on the climate. Inclusion of consideration of the cumulative effects of greenhouse gas (GHG) emissions in NEPA reviews was an important objective of the Obama administration. In 2016, the Obama CEQ issued guidance to federal agencies to provide for greater clarity and more consistency in how agencies address climate change in the environmental impact assessment process. “For the purposes of NEPA, the analysis of the effects of GHG emissions is essentially a cumulative effects analysis that is subsumed within the general analysis and discussion of climate change impacts,” the guidance stated.

In 2017, the Trump CEQ withdrew that guidance and in June 2019 issued its own draft guidance on consideration of GHG emissions. The draft specifies that agencies should focus on consideration of effects that are reasonably foreseeable and have a reasonably close causal relationship to the proposed action. Accordingly, the proposal would strike the definition of cumulative impact (and also strike the terms direct and indirect)to focus agency time and resources on considering whether an effect is caused by the proposed action rather than on “categorizing and determining the geographic and temporal scope of such effects,” which refer to impacts on the global climate.

In addition to the 2019 draft, the proposal builds on many other guidance documents the CEQ has issued since the implementing regulations were promulgated over 40 years ago. While the NEPA process has evolved under those documents, they do not have the legal backing of regulations. This has resulted in regulatory uncertainty and a history of protracted legal challenges when there is opposition to projects requiring NEPA reviews. (Since 1978, when the CEQ promulgated its NEPA regulations, there has been only one major revision. In 1986, the CEQ formally replaced the worst-case analysis requirement with a provision for the consideration of incomplete or unavailable information regarding reasonably foreseeable significant adverse effects.)

Also, over the past 50 years, federal courts have issued an extensive body of case law interpreting NEPA and the CEQ regulations. The Supreme Court has directly addressed NEPA in 17 decisions, and the U.S. district and appellate courts issue approximately 100 to 140 decisions interpreting NEPA each year.

“The proposed regulations would codify longstanding case law in some instances, and, in other instances, clarify the meaning of the regulations where there is a lack of uniformity in judicial interpretation of NEPA and the CEQ regulations,” says the CEQ.

The CEQ also notes that the Supreme Court has afforded “substantial deference” to the CEQ’s NEPA regulations. Hence, should the CEQ promulgate the sweeping changes it is proposing, history would suggest that any new regulations will have a good chance to withstand the expected legal battles.

Below, we describe just of few of the many additional changes included in the proposal.

Section 101 of NEPA requires that federal agencies make a statement on the environmental impact of proposed major federal actions, consider alternatives to the proposed action, and provide the public with copies of such statements. This Section has been interpreted by the courts, the agencies, and the CEQ to mean that NEPA is a procedural statute, not one that mandates particular results or substantive outcomes. (Contrast this to other environmental statutes, which do mandate an outcome; e.g., the outcome of the Clean Water Act is to “restore and maintain the chemical, physical, and biological integrity of the Nation’s waters.”)

The CEQ’s proposal seeks to clarify that its regulations are in line with the procedural foundation of NEPA. The proposal notes that existing language at 40 CFR 1500.1 includes a “vague reference” to “action-forcing provisions” to ensure that federal agencies act “according to the letter and spirit of the Act.” The proposal would remove “action-forcing provisions” and state that “the purpose and function of NEPA is satisfied if Federal agencies have considered relevant environmental information and the public has been informed regarding the decision-making process. NEPA does not mandate particular results or substantive outcomes.” 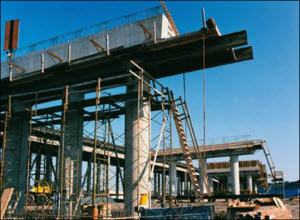 In his statement, as well as on many previous occasions, the president has complained that the NEPA process results in “endless delays.” The White House notes that the average length of a NEPA EIS—the most comprehensive type of NEPA environmental review—is over 600 pages, and the average time for federal agencies to complete EISs is 41/2 years. But some “delays” have been much longer.

“For example, in North Carolina, it took 25 years to begin construction of the Marc Basnight Bridge,” said the president. “In Alaska, improvements on a 15-mile stretch of Sterling Highway—the only road connecting local communities to the rest of the state, and a very dangerous area—it’s been delayed for over 15 years. In Washington State, it took two decades to finish environmental reviews for the runway at the Seattle-Tacoma International Airport.”

The CEQ proposal would require that agencies complete EISs within 2 years unless the lead agency approves a longer period in writing and establishes a new time limit. Environmental Assessments (EAs), which are less detailed than EISs, would need to be completed in 1 year.

The proposed language would also encourage agencies to tier their reviews by eliminating repetitive discussions of the same issues, focusing on the actual issues ripe for decision, and excluding from consideration issues already decided or not yet ripe at each level of environmental review. Except for proposed projects of “unusual scope or complexity, the proposal would also limit the length of EISs to 150 pages and EAs to 75 pages.

The proposal would modify the existing definition of major federal actions—those actions that must receive a NEPA review—by specifying which actions are not major. The proposal states:

“Major Federal action does not include nondiscretionary decisions made in accordance with the agency’s statutory authority or activities that do not result in final agency action under the Administrative Procedure Act. Major Federal action also does not include non-Federal projects with minimal Federal funding or minimal Federal involvement where the agency cannot control the outcome of the project.”

“In such circumstances, there is no practical reason for an agency to conduct a NEPA analysis because the agency could not influence the outcome of its action to address the effects of the project,” explains the CEQ. “For example, this might include a very small percentage of Federal funding provided only to help design an infrastructure project that is otherwise funded through private or local funds.”

The CEQ is proposing revisions to its regulations consistent with the One Federal Decision (OFD) policy introduced in August 2017 in a Trump Executive Order (EO). (See also the Office of Management and Budget’s OFD Framework.) One intent of the EO was to clarify and strengthen the role of the lead federal agency in the NEPA process. Provided with expanded authority, the lead agency will be able to involve cooperating state and federal agencies in the NEPA process as early as practicable and have more power to resolve disputes.

Regarding NEPA documents themselves, the proposal includes the following regulatory language:

The proposal includes regulatory language that would more closely involve project applicants and contractors in the NEPA process. Applicants and contractors would be able to assume a greater role in contributing information and material to the preparation of environmental documents, including preparing EISs themselves, under the supervision of the agency. Agencies would remain responsible for taking reasonable steps to ensure the accuracy of information prepared by applicants and contractors. If a contractor or applicant prepares the document, the decision-making agency would provide guidance, participate in the preparation, independently evaluate the statement, and take responsibility for its content.

“These changes are intended to improve communication between proponents of a proposal for agency action and the officials tasked with evaluating the effects of the action and reasonable alternatives, to improve the quality of NEPA documents and efficiency of the NEPA process,” states the CEQ.

NEPA is considered the nation’s bedrock environmental statute not because it is the first such statute. Rather, the critical importance of NEPA is that, in contrast to media-specific laws such as the Clean Air Act or Clean Water Act, it established a national policy to prevent or eliminate all damage to the environment. The public interest in that policy was apparent in the 12,500 comments on the ANPR the CEQ received. It is not unreasonable to expect that the new proposal will generate a substantially greater public response.