We’ve summarized some of the more significant enforcement cases from the past several months for a snapshot of OSHA’s recent inspection priorities. Aggressive enforcement continues for employers that come up short in their safety efforts. 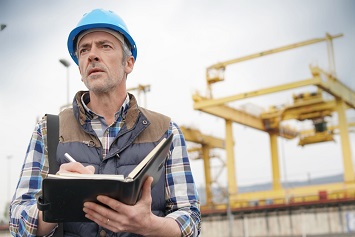 OSHA cited an Atlanta construction contractor for exposing employees to fall hazards after a fatal incident at a highway construction project. An employee suffered a fatal injury in a fall while attempting to install permanent metal decking on a bridge ramp. The contractor was cited for failing to ensure employees used a horizontal lifeline system and fall protection, failing to secure metal decking before allowing workers to use it as a walking surface, failing to provide fall protection training, and failing to conduct regular jobsite inspections.
Penalty: $170,020 fine

After an employee constructing a storage tank suffered fatal injuries in a 50-foot fall at a Missouri agricultural facility, OSHA initiated an inspected that resulted in two willful and 11 serious safety violations. According to OSHA, the company violated fall protection requirements by allowing employees to work at heights over 25 ft above ground without sufficient fall protection, permitting employees to use damaged fall protection equipment, and failing to train employees on fall protection hazards and safety precautions. The company was also cited for multiple violations of crane operation standards, including failing to train operators and signalers, improper rigging, failing to have a competent person inspect cranes and equipment, and exposing employees to hazards from working beneath crane loads. The company has been placed in OSHA’s Severe Violator Enforcement Program.
Penalty: $415,204 fine

OSHA cited a New Jersey frozen food manufacturer for one repeat violation and six serious violations after an employee suffered severe lacerations and contusions from being caught in an unguarded rolling machine. The company was cited for failing to guard the machine’s in-running nip point, a hazard for which the company was previously cited in 2018. Additional citations were issued for lockout/tagout violations and other safety hazards. “This injury could have been prevented if the company had complied with OSHA standards, and corrected the violation when previously cited,” said Lisa Levy, OSHA’s Hasbrouck Heights Area Director.
Penalty: $77,184 fine

After learning that an employee was hospitalized following a fall at a cookie manufacturing facility, OSHA initiated an inspection that resulted in two willful violations, two serious violations, and one other-than-serious violation. Inspectors discovered that the employer instructed employees to retrieve stored material by standing on the forks of a forklift that elevated them to a storage area atop a break room. The storage area lacked guardrails. The company also failed to retrain operators in appropriate use of a forklift and did not report the employee’s injury to OSHA within 24 hours as required. Two rotating bearings on a conveyor also lacked guarding.
Penalty: $221,257 fine

OSHA cited a grain storage and wholesaler after an employee was fatally engulfed in a grain bin at a Nebraska facility. The violations allege that the company violated grain handling standards by allowing employees to enter the grain bin without a harness and lifeline. The company was cited with seven repeat and ten serious safety and health violations for hazards associated with grain handling, including falls, respiratory protection, powered industrial trucks, and electrical safety. “Grain industry employers are legally required to train workers, and provide them with appropriate rescue equipment prior to entering a grain bin,” said Matt Thurby, OSHA’s Omaha Area Director. “Tragedies such as this can be prevented when safety procedures and hazard control measures are implemented.” The company has been placed in OSHA’s Severe Violator Enforcement Program.
Penalty: $228,592 fine

A Missouri charcoal manufacturer was cited with 19 serious violations at one facility and 10 serious violations at another facility for a variety of hazards that included confined space entry deficiencies, electrical hazards, housekeeping deficiencies, forklift hazards, hazardous noise, lockout/tagout deficiencies, inadequate machine guarding, accumulation of combustible material, and silica dust exposure. “Every employer is required to provide a workplace free of hazards,” said Principal Deputy Assistant Secretary of Labor for Occupational Safety and Health Loren Sweatt. “Employers who implement a safety and health program that includes identifying and fixing hazards can minimize the risk of worker injuries and illnesses.”
Penalty: $339,702 fine

After an employee at a concrete factory in St. Croix, U.S. Virgin Islands, suffered fatal injuries when the forklift he was using to lift and move a 3,200-pound bag of cement overturned due to an unstable load, OSHA cited the employer with willful, serious, and other-than-serious safety violations. Citations included failing to train forklift operators on how to properly lift and transport loads, failing to ensure that forklift operators knew how to handle stable loads, failing to ensure that operators wore seatbelts while operating forklifts, and failing to report the employee fatality within 8 hours as required. Following the fatality, OSHA inspectors returned to the factory three times and found that the employer continually failed to ensure that employees handled stable or safely arranged forklift loads. “Proper training on the safe use of a forklift could have prevented this tragedy,” said OSHA’s Puerto Rico Area Director Alfredo Nogueras.
Penalty: $90,217 fine