According to the U.S. Army Corps of Engineers, the Navigable Waters Rule (NWR), issued by the Corps and the EPA, will effectively remove 51% of the Corps’s mapped wetlands from federal jurisdiction under the Clean Water Act (CWA). Much of that eliminated inventory was subject to federal protection under the Obama administration’s 2015 Clean Water Rule (CWR), which, like the NWR, provided a definition for Waters of the United States (WOTUS), a critical term in the CWA yet one the Congress failed to define. 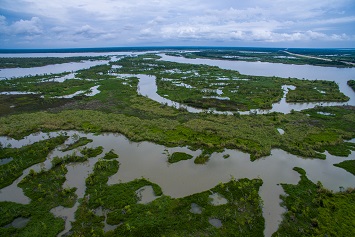 The Trump administration repealed the CWR in September 2019 and restored the regulatory regime that existed before its finalization.

One significant change between the two rules that will impact federal jurisdiction over wetlands relates to subsurface flows (or connections or features). Neither the CWR nor the NWR regulates subsurface flows themselves. However, the CWR established a connectivity test based on the significant nexus principle articulated by Justice Anthony Kennedy in Rapanos v. United States. Under the test, a wetlands with a shallow subsurface connection to a navigable (jurisdictional) water can be found to be jurisdictional also. The NWR has both eliminated the significant nexus test and established that, with few exceptions, a wetland that is connected to a navigable water only by a subsurface flow cannot be considered to be adjacent to the navigable water and, accordingly, cannot be considered jurisdictional.

For purposes of a significant nexus analysis, the CWR defined a shallow subsurface hydrologic connection as a “lateral water flow over a restricting layer in the top soil horizons, or a shallow water table which fluctuates within the soil profile, sometimes rising to or near the ground surface. In addition, water can move within confined man-made subsurface conveyance systems such as drain tiles and storm sewers, and in karst topography.”

The CWR emphasized that shallow subsurface connections move quickly and can carry contaminants directly to surface waters without the opportunity for nutrient or sediment reduction along the pathway. Thus, under the CWR, the EPA/Corps found it appropriate to regulate wetlands connected to jurisdictional waters via a subsurface connection.

“The agencies acknowledge that, in certain circumstances, pollutants released to groundwater can reach surface water resources,” say the agencies. “However, the statutory reach of [WOTUS] must be grounded in a legal analysis of the limits on CWA jurisdiction that Congress intended by use of the term ‘navigable waters,’ and an understanding and application of the limits expressed in Supreme Court opinions interpreting that term. This final rule does that, while also supporting the agencies’ goals of providing greater clarity, certainty, and predictability for the regulated public and regulators.”

Accordingly, for a wetland to be adjacent and therefore jurisdictional, the NWR requires a direct hydrologic surface connection between a jurisdictional or navigable water and the wetland in a typical year.

In the NWR, the EPA/Corps note that certain unique subsurface connections could be considered jurisdictional. For example, surface waters in urban areas that have been buried underground through an artificial tunnel system to facilitate urban development are still considered to be upstream tributaries—that is, they would not break the jurisdictional chain between a navigable water and a wetland. However, in cases when such channels never return to the surface or otherwise do not contribute surface water flow to a navigable water in a typical year, the upstream wetland or surface water features would not be jurisdictional under the final rule. In all cases, the underground or buried portion of a channel network is not jurisdictional under the final rule.

Also, the jurisdictional chain is not broken by subterranean rivers that flow under the surface of the ground for what is “generally a short period of time” through subterranean natural channels. The agencies do not consider subsurface rivers to be groundwater and hence are not excluded from CWA regulation.

The agencies add that while the final rule excludes groundwater from regulation, many states include groundwater in their definitions of waters of the state and therefore may subject subsurface flows to state regulation.

“Indeed, the CWA incentivizes State protection of groundwater; for example, grants under CWA section 319 may implement management programs which will carry out groundwater quality protection activities as part of a comprehensive nonpoint source pollution control program,” state the EPA/Corps.

“Such activities include research, planning, groundwater assessment, demonstration programs, enforcement, technical assistance, education, and training to protect the quality of groundwater and to prevent contamination of groundwater from nonpoint sources of pollution,” add the agencies. “In addition, groundwater quality is regulated and protected through several other legal mechanisms, including the Safe Drinking Water Act, the Resource Conservation and Recovery Act, and various state and local laws.”

The point here is that if a state regulates a subsurface flow, any such flow that connects a wetland to a navigable wetland ensures that the wetland will also be subject to state regulation.

The NWR becomes effective 60 days after its publication in the Federal Register.