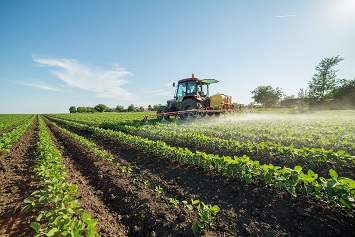 Dicamba is a broad-spectrum herbicide in the chlorophenoxy chemical family used to control weeds primarily in soybean and cotton crops. It was first approved in 1967.

U.S. soybean production is second in the world only to Brazil, with approximately 3.6 billion bushels produced in 2019. Data show that 70% of U.S soybean crops are produced with genetically engineered seeds designed to be herbicide-resistant, according to the EPA. Before these modifications, farmers had to spend many hours tilling fields to remove weeds before planting because the herbicides would kill the crops. The modified seeds allow the same production of soy with less than half the work.

Weeds, just like every life form, mutate to survive. Many tough weeds require strong herbicides to prevent them from choking crop production.

“EPA approved new registrations for two ‘over-the-top’ (OTT—meaning it can be sprayed over the top of the crop’s leaves) dicamba products—XtendiMax with VaporGrip Technology and Engenia Herbicide—and extended the registration for an additional OTT dicamba product, Tavium Plus VaporGrip Technology. These registrations are only for use on dicamba-tolerant (DT) cotton and soybeans and will expire in 2025, providing certainty to American agriculture for the upcoming growing season and beyond,” according to the EPA.

This was good news for soybean farmers and the crop protection chemical industry, which Grand View Research, a California-based marketing research company, values at almost $60 billion.

“We rely in great part on EPA support for the continued success of our industry, from measures encouraging biodiesel market expansion to these types of decisions regarding safe and effective use of crop protection tools. We thank EPA today for the many steps and time invested in coming to this decision to reregister a product relied upon by many soy growers,” said Bill Gordon, president of the American Soybean Association.

“With today’s decision, farmers now have the certainty they need to make plans for their 2021 growing season,” said EPA Administrator Andrew Wheeler. “After reviewing substantial amounts of new information, conducting scientific assessments based on the best available science, and carefully considering input from stakeholders we have reached a resolution that is good for our farmers and our environment.”

Earlier this year, dicamba was on the chopping block because the U.S. Court of Appeals for the 9th Circuit blocked the chemical and vacated the registration extensions of three dicamba-based products, saying that the EPA violated the Federal Insecticide, Fungicide, and Rodenticide Act (FIFRA) when it understated and failed to acknowledge risks associated with the chemical, which under certain conditions is prone to drift off of the properties to which it is being applied. The EPA subsequently canceled the registrations in question.

The EPA’s 2020 registration for these products includes new control features:

“EPA also recognizes and supports the important authority FIFRA section 24 gives the states for issuing locally appropriate regulations for pesticide use,” according to the EPA. “If a state wishes to expand the federal OTT uses of dicamba to better meet special local needs, the agency will work with them to support their goals.”

Learn more about the EPA’s dicamba assessment and registration.