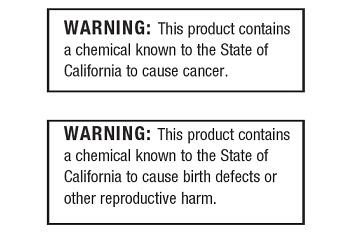 The proposed changes primarily will apply to businesses that sell food products in California or utilize the Prop 65 short-form warnings.

“Proposition 65 requires businesses to provide a ‘clear and reasonable’ warning to Californians about significant exposures to chemicals known to the state to cause cancer or reproductive toxicity,” according to McGuire Woods, a Richmond, Virginia-based law firm, in a Lexology article. The OEHHA’s current list of chemicals determined by the agency to cause reproductive harm or cancer includes more than 1,000 chemicals.

“If approved, Prop. 65 warning language will require any company using short-form warnings to revise their labeling and marketing materials,” according to The National Law Review.

Back in 2016, Prop 65 regulations were overhauled and required companies to “identify certain chemical or chemicals within the warning language and tie the chemical(s) to specific end-points: cancer and/or reproductive harm,’” according to The National Law Review. “However, the 2016 regulations also allowed companies to bypass these details by instead utilizing a ‘short-form’ warning on consumer products that effectively only required end-point identification and a URL link to a website maintained by OEHHA.”

“There has been widespread use of short-form warnings in ways that were not intended and do not further the purposes of Proposition 65,” according to the OEHHA. The agency also stated it has “received numerous inquiries from businesses seeking clarification as to whether the short-form warning could be used to provide safe harbor warnings for food products, and for additional guidance on the safe harbor warning content for short-form food warnings.”

The current regulatory proposal “sets a short-form label threshold of just five square inches or less,” according to The National Law Review, or when the packaging will not accommodate the full warning.

The OEHHA stated “over-warning” occurs sometimes and “that some companies have opted for the short-form warning precisely because it does not require the identification of specific chemical(s),” The National Law Review says. “Some companies use the short-form warning prophylactically whether or not a given product causes exposure to a listed chemical to avoid the expense of determining whether a warning is actually necessary and/or to ward off any private enforcers.

The proposed regulations will require short-form warnings to name the listed chemical and each exposure pathway, according to McGuire Woods.

“Since its enactment in 1986, Proposition 65’s citizen suit provision has imposed compliance burdens and legal risk on businesses,” McGuire Woods says. “The provision permits private parties to bring Proposition 65 lawsuits on behalf of the California attorney general, provided they give 60 days’ notice to the business that is the target of the suit. Private enforcers who prevail in their Proposition 65 lawsuits may recover 25 percent of the civil penalties plus attorneys’ fees.”

The proposed amendments will become effective 1 year after approval by the California Office of Administrative Law (OAL).

“A warning for a consumer product that is manufactured prior to the effective date [1 year after OAL approval] would be deemed clear and reasonable so long as it complies with the August 2016 revisions,” according to McGuire Woods. “Thus, the current amendments would allow manufacturers to sell through inventory manufactured before the effective date.”

The OEHHA states the proposed changes will not negatively impact small businesses because “Proposition 65 is limited by its terms to businesses with 10 or more employees.”

“This ignores the realities for many such businesses who lack bargaining power in their upstream and downstream agreements,” according to The National Law Review. “It is often the small business stuck in the middle that is saddled with Prop. 65 compliance and liability in the indemnity provisions with their more powerful business partners. This hidden cost to small businesses is enormous and will no doubt provide another round of ammunition to the private enforcers of Prop. 65.”