The COVID-19 pandemic has altered the nature of work in many industries and brought renewed attention to the importance of workplace safety, but OSHA continues to carry out inspections and issue citations to employers that expose workers to hazardous conditions. We’ve summarized some of the key enforcement cases from the past few months for a look at where OSHA is focusing its efforts. 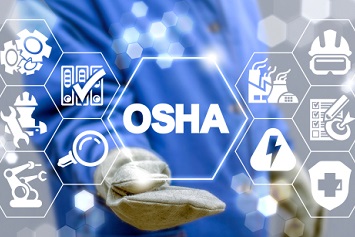 A plumbing contractor in Missouri was cited for failure to abate previously identified hazards following an OSHA inspection in response to a complaint in August 2020. In December 2016, OSHA cited the company after the death of an employee in an unprotected trench. During the 2020 inspection, OSHA found another of the company’s employees working at least 7 feet below ground in an unprotected trench. OSHA cited the company for failure to provide basic safeguards against trench collapse, such as a trench box or shoring material, and exposing an employee working in a trench to unsecured electrical and gas lines. The agency also alleges the company allowed an employee to work in a trench without head protection while exposed to overhead struck-by hazards.

A beekeeping supplies manufacturer was cited for failing to protect employees from machinery, including saw blades, rotating machinery, belts, pulleys, and chains, after an employee suffered an injury that resulted in a partial finger amputation. At the company’s Montana facility, inspectors found machine operators cleaning saw blades and other machinery without locking out and tagging out equipment to prevent sudden starts, as required. OSHA cited the company for failure to install guards on various equipment; control hazardous energy; test workers for hearing damage due to noise overexposure; and report the amputation within 24 hours as required. The agency also cited the company’s staffing contractor for failing to train employees in lockout and tagout procedures and fully power down a machine before maintenance and cleaning to prevent sudden starts and movement of machine parts.

OSHA cited an Ohio food producer and distributor for two repeat violations of machine safety standards after an employee suffered multiple lacerations and the partial amputation of her arm. The agency cited the company for similar violations in 2016 at the same facility. An investigation in September 2020 determined that the company failed to shut down and isolate energy to the auger during maintenance work—a process known as lockout/tagout (LOTO). The company also failed to train employees on the required use of LOTO procedures when conducting maintenance activities. “Machines and equipment must be disabled before workers perform service and maintenance to prevent unexpected startup or release of hazardous energy,” said OSHA Area Director Kimberly Nelson in Toledo, Ohio. “OSHA has specific regulations for implementing required training and safety procedures to protect workers from dangerous machinery.”

Following an inspection at a worksite where inspectors found employees in standing water as they installed water lines in two trenches as part of a street-widening project, OSHA cited the construction company for two willful, four repeat, and three serious violations. OSHA determined the company failed to ensure required cave-in protection was used, an appropriate means of escape existed, and workers wore hard hats, as required. The company was previously cited three times in 2017 for failing to provide trench workers with personal protective equipment, failing to provide a means of escape and hazard recognition training, allowing standing water inside the excavation sites, and failing to fix ladder defects.

A roofing contractor in Ohio was cited for the sixth time since 2012 with 2 willful and 1 serious violation for failure to use the required safety equipment to prevent workers from falling. OSHA inspectors observed the contractor and his employees three stories above ground using nail guns to install roofing material without fall protection, despite having the equipment available. “OSHA requires fall protection when working at heights greater than 6 feet. OSHA is determined to reduce the numbers of preventable, fall-related deaths in the construction and will hold employers accountable for intentionally exposing their workers to such serious dangers,” said OSHA Area Director Howard Eberts in Cleveland.

OSHA cited a superstructure, foundation, and concrete contractor for violations of trenching and excavation standards after 2 employees were fatally injured in a 30-foot-deep trench collapse at a New York worksite. The company was cited for failing to provide a protective system to prevent a trench collapse and remove the employees from the trench after a competent person employed by the company had identified a cave-in hazard. OSHA also found the trench lacked an adequate ladder or other safe means of exit and that the company allowed stacked concrete and excavated materials to be stored at the trench’s edge. In addition, employees working adjacent to and beneath an operating excavator lacked head protection, exposing them to struck-by hazards.

A container-shipping facility was cited for violating powered industrial vehicle safety standards after an employee suffered a leg amputation and crushed pelvis after he fell off and was then run over by a powered heavy-lift vehicle used to move and stack steel containers. Following an inspection at its Illinois facility, OSHA cited the company for one willful violation and two serious violations for failure to ensure employees were secured while riding in the reach stacker and failure to provide employees with refresher training or evaluate them every 3 years on their ability to safely operate powered industrial vehicles, as required.