The California Air Resources Board (CARB) has petitioned the EPA to adopt more stringent emissions standards for locomotives. Locomotives are currently subject to EPA’s Tier 4 emissions standards, which are “substantially reducing per-locomotive emissions and partially mitigating projected increases in rail traffic,” notes CARB Chair Mary Nichols in her letter. But the reductions do not […]

April is Distracted Driving Month, and the National Safety Council (NSC) is urging Americans to #justdrive. More than a hashtag, it’s a strategy for saving lives.

The midterm evaluation (MTE) of greenhouse gas (GHG) emissions limits for cars and light-duty trucks, which President Obama’s EPA released 16 months before the deadline for doing so, will be reconsidered by President Trump’s EPA. The reconsideration is needed, the EPA now says, because the MTE was not developed in consideration of a second MTE […] 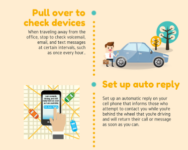 The Federal Motor Carrier Safety Administration (FMCSA) recently confirmed that two provisions of the hours-of-service rule that have been suspended since December 2014 will remain suspended.

Young millennials—those between the ages of 19 and 24—get the dubious distinction of being the most distracted drivers on the road, according to new research. If your workforce includes young people, you’ll want to know more.

Travel-related accidents kill more workers than any other hazard. That’s why we often talk about how to keep workers safe on the roads here in the United States. But what about workers who travel abroad, where the rules and vehicle standards are different? Where the roadway construction, engineering, traffic management, and even signage are less […]

The Alliance of Automobile Manufacturers, which comprises 12 of the nation’s largest carmakers, is requesting that the EPA withdraw its final midterm evaluation (MTE) of the Agency’s greenhouse gas (GHG) emissions standards for model year (MY) 2022–2025 cars and light-duty trucks. The Alliance’s main objection is that the EPA rushed the publication of the final […]

Driving a large truck is a dangerous job. The occupational fatality rate for large truck drivers is 23.9 deaths per 100,000 workers, much higher than the national average of 3.4 per 100,000 workers for all industries. Nonfatal crashes and property damage crashes are a serious issue, as well. Yesterday we looked at some common factors […]