Here is the skinny on the Occupational Safety and Health Administration’s (OSHA) much-anticipated emergency temporary standard (ETS) on COVID-19 vaccinations for large employers. Released on November 4, the policy requirements take effect December 5 and must be fully implemented by January 4, 2022. What Large Employers Need to Know Who is covered? The ETS covers all […]

The Office of Inspector General (OIG) on August 4 issued its semiannual report, “Compendium of Open and Unresolved Recommendations: Data as of March 31, 2021.” The completion of the compendium is required by law and mandates that each inspector general prepare semiannual reports for Congress, which must include “an identification of each significant recommendation described […]

The Joint Commission, which oversees accreditation of hospitals and other healthcare facilities, issued new and revised workplace violence standards that take effect January 1, 2022. The workplace violence prevention standards will apply to all Joint Commission-accredited hospitals and critical access hospitals. The Centers for Medicare & Medicaid Services and many states, along with private insurers, […]

An Occupational Safety and Health Administration (OSHA) COVID-19 emergency temporary standard (ETS) went into effect in early June 2021, and compliance with most of the provisions was required by July 6. The final set of provisions (pertaining to training, ventilation, and barriers) wasn’t mandated until July 21. With some exceptions, the ETS applies to all […] 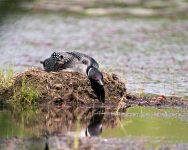 On August 5, 2021, the EPA and the U.S. Department of the Army announced upcoming community engagement opportunities for public input into their efforts to revise the “waters of the United States” (WOTUS) definition. Redefining WOTUS is a two-part process for the agencies. The first rulemaking will restore the WOTUS definition to the version in […]