Disposable filtering face piece respirators (FFR), more commonly called dust masks, are the respiratory protection most used by employees in the workplace. Disposable FFRs are not intended for repeated or extensive use; yet, for reasons of expense, convenience, and supply, they often are. At what point does a disposal FFR begin to fail to protect the worker wearing it? The National Institute for Occupational Safety and Health (NIOSH) has studied the issue and offers several guidelines. 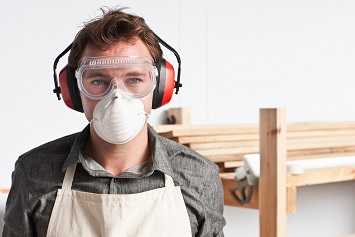 When Reuse Is Safe

NIOSH states that it is not always necessary to dispose of the FFR the first time it is removed.  In most workplace situations, an FFR can be reused as part of an employer’s respiratory protection program. Safe FFR reuse is affected by a number of variables that impact respirator function and contamination over time, says NIOSH. Unless the respirator manufacturer identifies a specified duration of use—for example, single use only, or the employer’s respiratory protection program excludes reuse—users can wear an FFR until it is damaged, soiled, or causing noticeably increased breathing resistance.

However, there are limitations for reuse. Perhaps most importantly, the FFR should be used and reused only by the same wearer. Also, between uses, the FFR should be stored in a way that protects it from damage, dust, contamination, sunlight, extreme temperatures, excessive moisture, and damaging chemicals. In addition, since most disposable FFRs do not have solid frames, they should be stored in ways that prevent deformation of the face piece, straps, and exhalation valve, if present.

Generally, reuse must stop at the point when the FFR begins to lose its protective qualities.

But deciding when to stop using an FFR may not be simple. NIOSH notes that there is “no way of determining the maximum possible number of safe respirator reuses as a generic number to be applied in all cases.” Assuming that the FFR retains its physical integrity, the decision on when to continue or discontinue using an FFR should be based on a number of factors. According to NIOSH:

“The key consideration for safe extended use is that the respirator must maintain its fit and function,” states NIOSH.