Although it sounds like a trick question, it’s not. A container that seems empty of all its hazardous waste contents may not be empty enough to avoid being managed as a hazardous waste. 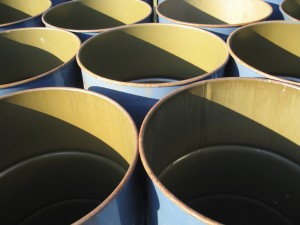 The three empty container standards apply to both containers and inner liners used for the storage of RCRA hazardous waste.

The hazardous waste container or inner liner is empty if:

(The empty-by-weight standards are often used when there is a mixture of solid and liquid hazardous waste in the container.)

The caveat to this standard is that there is no federal guidance as to what particular method constitutes “triple-rinsing,” other than to say that the container must be rinsed three times with a suitable solvent. Your state, however, may specify how to triple-rinse the container. So it’s a good idea to contact your state environmental agency to see if it has triple-rinse guidelines and remember that the rinse material must be managed as a hazardous waste. In addition, remember that any inner liner that is removed must be managed as a hazardous waste.

The container may now be RCRA empty, but that doesn’t end the issue. What about the residues remaining in, or removed from, the container?

Once you’ve addressed the residue issue, you must consider how to manage any rinsate used in cleaning the container.

The EPA has noted that rinsate (the residual mixture of waste and cleaning solvent) from an empty container is considered a hazardous waste and must be contained and disposed of in compliance with RCRA if the rinsing agent includes a solvent (or other chemical) that would be a listed hazardous waste when discarded. However, the EPA has not fully clarified whether a rinsing agent that would not be a listed waste when discarded is exempt or regulated by RCRA when the rinsate removed from the empty container exhibits a characteristic of hazardous waste. You should check with your state regulatory agency to see what its policy is on this.

The puncturing or venting of aerosol cans is a controversial issue under the empty container rules. To dispose of the aerosol can as nonhazardous, the can must be emptied in accordance with the empty container standards, and the can itself cannot qualify as a hazardous waste. If the aerosol can is holding a compressed gas (rather than a liquid), it is unclear, however, whether the act of venting to render the can empty would constitute treatment and therefore require a permit. EPA regions and state environmental compliance agencies differ on the answer and should be contacted in order to determine their position.

Bear in mind that the residue in a RCRA-empty container will still be considered a toxic chemical under the Emergency Planning and Community Right-to-Know Act (EPCRA) for reporting purposes on Form R under EPCRA Section 313. In other words, the status of a toxic chemical as a nonhazardous waste under RCRA has no impact on the applicability of EPCRA regulations on that chemical.