The EPA is proposing to provide additional lead time for boat builders to meet the federal Tier 4 standards for engines used in vessels such as lobster fishing boats and pilot boats. 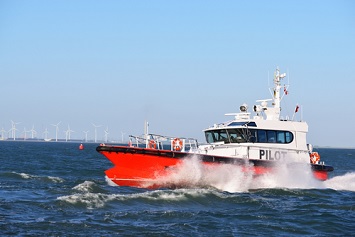 In the proposal, the Agency explains that it has learned from industry that there are no certified Tier 4 engines with suitable performance characteristics for the vessels they need to build—specifically, high-speed commercial vessels that rely on engines that have high power density and rated power between 600 and 1,400 kilowatts (kW). The proposal would change the implementation date of the Tier 4 standards for qualifying engines from 2017 to 2024. This would allow engines installed on vessels to continue to meet the Tier 3 standards. Also included in the proposal is a new waiver process that would allow for continued installation of Tier 3 engines for certain vessels if suitable Tier 4 engines continue to be unavailable.

In addition, the Agency is proposing a “technical correction” to the diesel fuel regulations to allow U.S. fuel manufacturers and distributors to make distillate diesel fuel that complies with the international sulfur fuel standards.

In 2008, the EPA promulgated its Tier 4 emissions standards for commercial marine diesel engines rated at or above 600 kW. These standards, which were expected to require the use of aftertreatment technology, phased in from 2014 to 2017, depending on engine power. Based on feedback from boat builders, the EPA learned why there are availability problems with suitable Tier 4 engines.

“EPA has learned that manufacturers of vessels for certain high-speed commercial applications continue to face important challenges associated with the Tier 4 engine standards,” explains the Agency. “These vessels have performance needs for achieving substantial propulsion power from a light­weight engine. In short, manufacturers have been looking for engines with higher power density than those certified to Tier 4 standards. As engine manufacturers certify additional Tier 4 engines, vessel manufacturers will need time to evaluate those engine options and make changes to vessel designs to account for the changing engine parameters and specifications.”

The Agency notes that one major challenge to meeting the Tier 4 requirements involves the installation of selective catalytic reduction (SCR), an aftertreatment technology for compliant engines. Whale-strike-avoidance rules increase the demand for pilot boats that are fewer than 65 feet long. This additional constraint further complicates the challenge to design vessels with Tier 4 engines because the SCR emissions control system takes up a significant amount of already limited space.

Extension of the compliance deadline is expected to increase air pollution. For example, the expected annual increases for nitrogen oxides (NOx) and PM-10 are about 108 and 2.3 tons in 2019, decreasing to 37 and 1 ton, respectively, in 2022 and 2023. The lifetime inventory increase is estimated to be about 5,098 tons of NOx and 107 tons of PM-10, assuming a 13-year lifetime for affected Tier 3 engines. This represents less than one-tenth of 1 percent of the national annual emissions for these pollutants from commercial Category 1 marine diesel engines (i.e., engines below 7.0 liters per cylinder displacement), says the EPA.

The fuel portion of the proposal clarifies that fuel manufacturers and distributors may domestically sell distillate diesel fuel that meets the global sulfur standard adopted by the International Maritime Organization (IMO), which takes effect January 1, 2020. The EPA’s existing regulations limit the sulfur content of distillate fuel to 1,000 parts per million (ppm). The proposal would not amend this standard. Annex VI to the International Convention for the Prevention of Pollution from Ships (MARPOL Annex VI) allows for distribution of distillate diesel fuel that complies with the 5,000 ppm global sulfur standard. But U.S. regulations also preclude the distribution of sulfur distillate fuel exceeding 1,000 ppm in the United States. The U.S. distribution limitation impedes the ability of U.S. fuel manufacturers to competitively supply distillate fuel above 1,000 ppm to the global marine fuel market.

“EPA does not have foreknowledge of the extent to which ship owners and operators would choose to use 5,000 ppm distillate fuel instead of residual fuel or distillate-residual fuel blends and cannot predict the extent to which ship owners and operators will be bunkering their vessels in the United States under the new global marine fuel standard,” says the Agency. “However, we can say with confidence that removing the restriction on the distribution of distillate fuel between 1,000 ppm and 5,000 ppm in the United States will provide greater flexibility for supplying the global marine fuel market and could therefore nominally reduce fuel costs.”