Attempts by the Menominee Indian Tribe of Wisconsin to invalidate a Clean Water Act (CWA) Section 404 (dredge and fill) permit the Michigan Department of Environmental Quality (MDEQ) granted Aquila Resources Inc. for a mining project on a portion of the Menominee River were unsuccessful in both a federal district court and the U.S. Court of Appeals for the 7th Circuit. 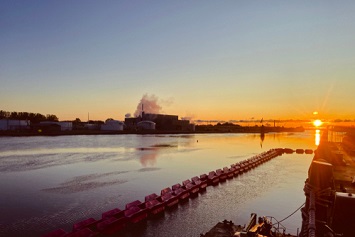 Aquila had applied to the MDEQ to permit the project on a portion of the river the Tribe regards as sacred. The Tribe initially asked the U.S. Army Corps of Engineers to assume permitting authority from the state because, over the years, the disputed portion of the river had transformed from a state water to a water used for interstate commerce—that is, a water under federal jurisdiction. Because of the changed status of the river, the Tribe contended that only the federal government could grant a Section 404 permit. After the Corps refused to do so and the EPA withdrew its objection to the permit after it was revised, the Tribe sought relief in the district court, which dismissed the Tribe’s complaint on the grounds that it had not challenged any final action by the Corps or the EPA.

In considering the appeal, the 7th Circuit panel conceded that the Tribe got the “runaround” from the EPA. However, in its opinion, the panel concluded that the Agency’s ultimate decision not to object to the MDEQ’s revised permit was within the EPA’s discretion.

The case is unusual because Michigan is one of only two states that has Section 404 permitting authority (New Jersey is the other).

The Menominee River runs along the border between Northern Wisconsin and Michigan’s Upper Peninsula. According to a Menominee origin story, the Tribe came into existence along the banks of the river thousands of years ago. This birthplace contains artifacts and sacred sites of historic and cultural importance to the Tribe. The Tribe returns to the riverbanks for ceremonies and celebrations.

In 2017, the Tribe learned that Aquila intended to embark on a mining project along the river and in close proximity to Wisconsin’s northeast border. Aquila had successfully applied for the necessary permits from the state of Michigan, including the MDEQ’s Section 404 permit.

Initially, the EPA objected to the Section 404 permit the MDEQ issued to Aquila for the project. The MDEQ amended the permit, and the Agency withdrew its objections.

In August 2017, the Tribe expressed its concerns in letters to the EPA and Corps. According to the Tribe, since the MDEQ obtained its permitting authority, the Menominee River experienced a growth of commercial activity, including riverboat tourism. This commercial activity, the Tribe argued, had a legal consequence: The segment of the river nearest to the proposed mining site constituted a navigable waterway within the meaning of the CWA (i.e., one on which interstate commerce occurs), and therefore, permitting for it could not remain delegated to the state. The Tribe asked the EPA and Corps to revisit whether they—as opposed to the MDEQ—should exercise authority over the permit application. At the very least, the Tribe sought to consult with the EPA and Corps before Michigan made any decision about the project.

“Who decides the permitting question matters greatly to the Tribe, and for good reason,” wrote the 7th Circuit panel. “The Tribe sought to negotiate directly with the federal government because the United States has a long-recognized general trust responsibility toward Native Americans. If the permitting had been handled in the federal system, the Tribe would have enjoyed more participation rights. For example, the National Environmental Policy Act would have applied and likely required the EPA to complete an environmental assessment or impact statement about the [mining project].”

In response to the Tribe’s letter, the Corps wrote it could not intervene because the MDEQ possessed permitting authority. The EPA responded with a six-sentence letter addressing none of the Tribes concerns but offered to talk with the Tribe by phone.

“Neither response addressed the Tribe’s request for the agencies to reconsider whether changed circumstances warranted the renewed exercise of federal authority over the relevant section of the Menominee River,” wrote the panel.

Before the district court, the Tribe alleged that the EPA’s decision to withdraw its objections to the MDEQ’s permit violated the Administrative Procedures Act (APA) because the Agency provided little to no explanation, rendering its decision arbitrary and unsupported. As noted, the district court responded by stating that it lacked the authority to review the EPA’s and Corps’ responses because they were not “final agency actions” within the meaning of the APA. The 7th Circuit panel agreed.

“Because the Corps and EPA letters only reiterated the status quo, there was nothing for the district court (or now, us) to review,” the panel stated.

A Matter of Discretion

Also, the district court reasoned that the EPA’s decision to withdraw its objections was “committed to agency discretion by law.” Again, the panel agreed and discussed at some length the breadth of discretion to which the Agency is entitled under Section 404.

“When deciding whether a decision is committed to agency discretion, we first review the applicable statutes and regulations,” stated the panel. “The Tribe does not point to any regulations governing the withdrawal of objections. We searched too and came up empty, finding no statute, regulation, or guideline that instructs the EPA how to decide whether a state has tendered a satisfactory resolution to a previous permitting objection.”

“The proper conclusion, then, is that, in the absence of any regulation addressing the basis for the decision to withdraw an objection, the choice is as committed to the agency’s discretion as the decision to object in the first instance. If the EPA finds a shortcoming in the state’s response to a particular objection, the agency must again make a judgment call about whether to maintain the objection. The decision may depend on many factors, including the EPA’s judgment about not only the materiality of the concern that gave rise to the initial objection and the sufficiency of the state’s responsive measures, but also whether the agency’s limited time and resources are best used to persist with an objection pertinent to one project when others likewise call for federal attention.” [emphasis added]

The panel points out that the Tribe’s claim would be stronger if the CWA required the EPA to object if certain conditions were not met. But there is no requirement in the CWA that the EPA address all defects in a proposed permit, which adds weight to the Agency’s discretionary power.

The panel faults the EPA and Corps for failing to provide a “meaningful response” to the Tribe’s concerns. Also, while the 7th Circuit has declined to overturn the district court’s rule, the panel noted that the Tribe is exploring its options at the state level to stop the mining project. Mainly, the Tribe is contesting the Section 404 permit before the MDEQ. And if that decision does not go in the Tribe’s favor, the Tribe can seek review of the outcome in state court.