OSHA has announced that one of its priority goals for 2018 is to reduce trenching and excavation accidents. There appear to be solid reasons for doing so. In 2011, OSHA said that two workers a month were killed in trench collapses, and the picture has not improved. 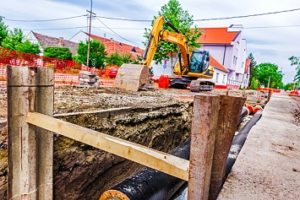 According to the Bureau of Labor Statistics, excavation- and trench-related fatalities in 2016 were nearly double the average of the previous 5 years. OSHA’s general goal is to increase awareness of trenching hazards in construction, educate employers and workers on safe cave-in prevention solutions, and decrease the number of trench collapses.

In attempting to explain the upswing in fatalities, one construction professional points to “ignorance to safety rules, lack of supervision, pressures of time and money, and sometimes, outright laziness.” To that list, some employee safety groups add insufficient inspection and enforcement by federal and state safety agencies.

OSHA defines an “excavation” as any man-made cut, cavity, trench, or depression in the earth’s surface formed by earth removal. A “trench” is defined as a narrow underground excavation that is deeper than it is wide and no wider than 15 feet (ft). Working in either trenches or excavations carries risks, but because the space provided is more confined and trench walls are generally steeper, the hazards are higher in trenches. Cave-ins or collapses are the single greatest hazard; 1 cubic yard of soil may not sound like a lot, but it can weigh as much as 3,000 pounds. Other risks include falls, falling loads, hazardous atmospheres, and encounters with mobile equipment.

OSHA has promulgated regulations to ensure that trenches and excavations are safe working environments (29 CFR 1926.651 and 1926.652). Those rules should be read in their entirety and adhered to without exception. Here are the major requirements.

The most widely used protective measures are sloping, benching (sloping with steps), shoring, and shielding. Shielding involves the use of structures called trench boxes or trench shields. The type of protection selected is generally contingent on the type of solid in which the excavation is made. Again, for deeper trenches, that determination must be made by a registered PE.

OSHA is currently encouraging those who engage in trenching and excavation to participate in the National Utility Contractors Association’s (NUCA) 2018 Trench Safety Stand Down, being held June 18–23, 2018.  A safety stand-down presents the opportunity for employers to talk directly to employees and others about safety. The upcoming stand-down will focus on trench and excavation hazards and reinforce the importance of using trench protective systems and protecting workers from trenching hazards, says the NUCA.