California’s Department of Industrial Relations’ Division of Occupational Safety and Health (Cal/OSHA) cited two contractors for multiple serious safety violations after a worker was fatally struck by a steel beam last August while working on a light rail tunnel project in San Francisco. The agency is seeking $65,300 in penalties. 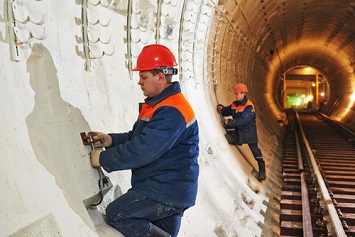 The two contractors formed a joint venture to work on the Twin Peaks Tunnel Rehabilitation & Rail Replacement project. The tunnel project included refurbishing the infrastructure, replacing rails, and upgrading signal systems and other parts of the over 100-year-old tunnel.

On August 10, 2018, employees were using heavy equipment and tools to work in and around the tunnel. One worker was operating a rail crane to push two flat railcars loaded with equipment into the tunnel.

The crane’s boom was in an upward, vertical position when it struck an overhead steel beam. The beam was dislodged from its support brackets and fell approximately 13 feet, fatally crushing an employee walking nearby.

Cal/OSHA investigators concluded that the two employers did not identify the potential hazards presented by pushing two loaded flat railcars into the tunnel and did not control the crane’s travel to avoid collisions. Investigators discovered the crane operators had not been trained to safely operate the equipment, and that workers had not been trained on safe procedures when the crane was being operated near them.

The serious accident-related violations were cited for failure to control the crane while it was moving and the employers’ failure to implement an effective injury and illness prevention plan (IIPP). California’s IIPP standard is Cal/OSHA’s most frequently cited regulation. There is no equivalent federal OSHA standard.

The serious citations were issued for two violations related to the employer’s failure to safely transport workers while in the tunnel.

Cal/OSHA classifies a violation as serious when there is a possibility that death or serious harm could result from the actual hazard created by the violation. Violations are classified as accident-related when the agency determines that an injury, illness or fatality is caused by the violation.

Cal/OSHA’s Mining and Tunneling Unit investigates complaints of hazards and reports of accidents in mines and tunnels, and issues citations when violations are found.

Employers in California must comply with a stricter set of workplace safety and health standards than employers in other states.

State occupational safety and health programs are required to be “at least as effective” as federal OSHA programs, but states can and sometimes do have standards stricter than the federal standards.

In addition to the IIPP standard, California also has its own unique standards for: