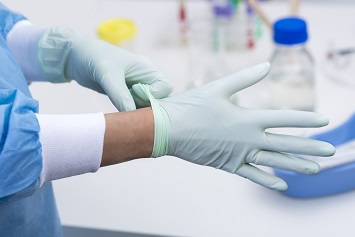 Investigators looked at the use of a sporicidal product containing hydrogen peroxide, peracetic acid, and acetic acid and found that:

Employees also reported no ventilation in some of the bathrooms they cleaned, and investigators observed staff cleaning closets in units that had no supply or return airflow.

NIOSH published its findings in an article, “Health problems and disinfectant product exposure among staff at a large multispecialty hospital,” in the American Journal of Infection Control.

The investigators recommended that workers at the hospital:

Repetitive-motion injuries were the most common recordable injury among pharmacy department employees. NIOSH investigators noted hand and neck symptoms and conditions that were consistent with work-related MSDs.

NIOSH’s recommendations for emergency responders and their employers include:

NIOSH’s HHE activity also led to a number of specialty publications and tools for employers, including: