The Occupational Safety and Health Administration (OSHA) has cited Philadelphia Energy Solutions for serious violations of the process safety management (PSM) standard and proposed $132,600 in penalties. 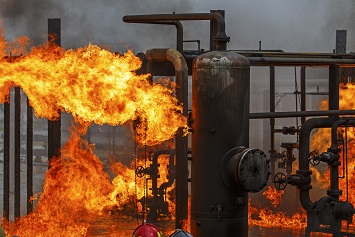 The citations and penalties stem from a June 21, 2019, fire and subsequent explosions at the company’s Girard Point Refinery Complex in Philadelphia, Pennsylvania. The agency alleges 10 serious violations of the PSM standard.

“When employers fail to evaluate and address potential hazardous conditions associated with chemical processes, catastrophic events such as this can occur,” Downs said.

There were no fatalities or serious injuries in the incident at the Girard Point Refinery Complex.

The U.S. Chemical Safety and Hazard Investigation Board (CSB) still has an open investigation into the incident. CSB October 16, 2019 released a factual update of preliminary findings. The board found that a pipe elbow in the refinery’s alkylation unit had corroded to half the thickness of a credit card and burst, releasing process fluid that included over 5,000 pounds of hydrofluoric acid.

The board also concluded:

The piping circuit containing the ruptured elbow was installed in about 1973 and met 1965 standards that did not specify nickel (Ni) and copper (Cu) composition requirements for piping.

Corrosion also was a cause in other incidents CSB has investigated—a January 12, 2009, flash fire and explosions at the Silver Eagle Refinery in Woods Cross, Utah and August 6, 2012, fire at the Chevron Refinery in Richmond, California. The citations in the wake of the 2012 Chevron Refinery fire resulted in a $1 million settlement.