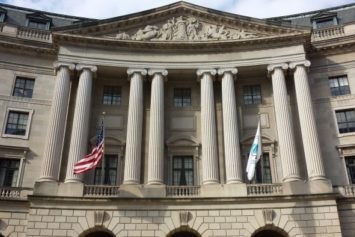 At first glance, this number may appear surprisingly high because, unlike the Clean Air Act or the Clean Water Act, the general public is not familiar with NEPA. However, NEPA is still regarded as the nation’s bedrock environmental law, and environmental groups fully understand the profound implications of its implementation on the environment; accordingly, groups mobilized a strong public response. The result, according to one group, is that 94% of comments opposed the CEQ’s proposal to expedite the NEPA process by changing key definitions. Importantly, the revisions would ensure that a project’s effects on climate are low-priority considerations in NEPA reviews.

NEPA requires that all federal agencies prepare detailed statements assessing the environmental impact of and alternatives to major federal actions significantly affecting the environment. Proponents of projects subject to NEPA reviews (also called the NEPA process), which include infrastructure projects favored by the Trump administration, asserted that the climate-related provisions an Obama-era guidance document inserted into the NEPA process effectively delayed these projects for years and eventually killed them. In an Executive Order (EO) issued in August 2017, President Donald Trump changed direction, ordering the CEQ to take actions, including the promulgation of regulations, to “ensure that agencies apply NEPA in a manner that reduces unnecessary burdens and delays as much as possible, including by using CEQ’s authority to interpret NEPA to simplify and accelerate the NEPA review process.” The January 2020 proposal is, to date, the main action the CEQ has taken in response to the EO.

Our article summarizes the proposal. Below, we provide excerpts from detailed comments on those proposed provisions from organizations that either support or oppose the CEQ’s action.

The CEQ’s 47-page proposal in the Federal Register contains only two short paragraphs that mention climate and greenhouse gases (GHGs). The CEQ notes that in June 2019, it issued draft guidance on how NEPA analyses should consider GHG emissions. But otherwise, the CEQ states it did not find it appropriate to address any single category of impacts in the regulations. “If CEQ finalizes this proposal, CEQ would review the draft GHG guidance for potential revisions consistent with the regulations,” states the CEQ.

“Mitigating climate change one project at a time is a fool’s errand akin to draining a swimming pool one thimbleful at a time. Worse, the economic losses from blocking individual projects based on greenhouse gas considerations are bound to vastly exceed the speculative climate benefits. Moreover, because affordable energy and economic growth are critical to human mastery of climate-related risks, and because the climatological significance of any infrastructure project is for all practical purposes nil, blocking energy infrastructure or other private investment requiring federal agency approvals in the name of climate protection is bound to do more harm than good.”
—Coalition of 11 “free-market organizations”

“NEPA requires a thorough and contextual assessment of potentially significant climate impacts, which the social cost of greenhouse gases helps provide. While CEQ should promote NEPA compliance through appropriate use of the social cost of greenhouse gases when relevant, the Proposed Rule instead continually attempts to undermine proper consideration of global climate impacts.”
—Coalition of seven environmental and public policy organizations

The second sentence of the current definition of major federal action (40 CFR 1508.18)states that “major reinforces but does not have a meaning independent of significantly (1508.27).” Section 1508.27 states: “‘Significantly’ as used in NEPA requires considerations of both context and intensity: (a) Context. This means that the significance of an action must be analyzed in several contexts such as society as a whole (human, national), the affected region, the affected interests, and the locality.” The proposal would delete the second sentence in 1508.18 and begin, “Major federal action or action means an action subject to Federal control and responsibility with effects that may be significant.” The definition of significantly would be eliminated. Effectively, the proposal disconnects the terms major federal action and significantly.

“CEQ’s proposed new interpretation [of major federal action] would allow federal agencies to significantly harm the environment without ever analyzing those harms, just because their actions were not deemed ‘major’ by some other metric. This approach, taken literally, could have extraordinary and troubling consequences: If ‘major’ were interpreted as creating a monetary threshold, for example, CEQ’s proposed approach could exempt from review of federal actions with minor monetary costs but potentially devastating environmental or health impacts—say, risk of release of a toxic chemical, introduction of an invasive species, or spread of a lethal and contagious virus. That approach would rip an unjustified loophole out of NEPA’s protective mandate.”
—Natural Resources Defense Council

“In deleting ‘significantly,’ CEQ proposes to omit important and explicit guidance to agencies on what is a significant effect. This has major implications on the practice of NEPA, particularly because CEQ proposes to water down the threshold definition of significance and thus fewer proposed actions may undergo rigorous NEPA review.”
—Five State of California agencies

The current definition of effects includes indirect effects, whichare those effects caused by the action and are later in time or farther removed in distance but are still reasonably foreseeable. Also, the CEQ’s existing regulations define cumulative impact as “the impact on the environment which results from the incremental impact of the action when added to other past, present, and reasonably foreseeable future actions regardless of what agency (federal or non-federal) or person undertakes such other actions.” The CEQ has proposed to “simplify” the definition of effects by consolidating the definition into a single paragraph and striking the specific references to direct, indirect, and cumulative effects. According to the CEQ, these changes will provide clarity on the bounds of effects. Under the proposed definition, effects must be reasonably foreseeable and have a reasonably close causal relationship to the proposed action or alternatives; a “but for” causal relationship is insufficient to make an agency responsible for a particular effect under NEPA, says the CEQ.

“The Supreme Court has appropriately recognized that because agencies have limited time and resources, the scope of their NEPA reviews must remain manageable. This can be achieved by focusing the agency’s discussion ‘on those consequences of greatest concern to the public and of greatest relevance to the agency’s decision,’ rather than overemphasizing temporally or geographically remote effects—including cumulative impacts involving other projects or actions that lie beyond the agency’s jurisdiction. NEI thus agrees with CEQ’s observation that ‘[a]gencies are not expected to conduct exhaustive research on identifying and categorizing actions beyond the agency’s control’—which is often the case in cumulative impact analyses.”
—Nuclear Energy Institute (NEI)

“[T]he concept of causation is central to understanding an agency’s obligation under NEPA to consider any effect, regardless of whether it is deemed direct or indirect. While an effect may bear some relationship to a Federal action, that is not the test for inclusion in a NEPA review, and we are concerned that one of the reasons for the expansion of scope of reviews and mission creep in recent agency practice is simply confusion over the meaning of an ‘indirect’ effect. By clarifying that effects must only be considered when there is a ‘reasonably close causal relationship’ that would satisfy a proximate cause analysis under tort law, this aspect of the revised definition will enhance agency and public understanding of the scope of review, eliminate issues in litigation, and conserve limited agency resources.”
—Joint comment by American Petroleum Institute, Association of Oil Pipelines, and International Association of Geophysical Contractors

“Cumulative and indirect effects consideration has been a fundamental part of the NEPA process since its inception. Not coincidentally, this is also the major basis for NEPA challenges regarding climate change issues, the body of which have recognized that analysis of climate change, an indirect and cumulative effect, is required by the statute.”
—Public Employees for Environmental Responsibility

“Failing to analyze cumulative impacts under NEPA will have negative consequences for efforts to address climate change in Alaska. Greenhouse gas emissions that cause climate change are the quintessential example of an individually minor but cumulatively major impact. Although any given project may emit a relatively low amount of greenhouse gases, each project across the nation and over time adds to collective and increasing global carbon emissions that are acting together to warm the Earth’s atmosphere.”
—Coalition of organizations in Alaska

The CEQ has proposed to define reasonable alternatives as “a reasonable range of alternatives” that are “technically and economically feasible.” Agencies would not need to consider alternatives that are unlikely to be implemented because they are infeasible, ineffective, or inconsistent with the purpose and need for agency action.

The U.S. Supreme Court has held that the number of alternatives that an agency must analyze under NEPA must be reasonable and that NEPA does not require an agency to ‘ferret out every possible alternative …’ (Vermont Yankee Nuclear Power Corp. v. NRDC (1978)). (“Common sense also teaches us that the ‘detailed statement of alternatives’ cannot be found wanting simply because the agency failed to include every alternative device and thought conceivable by the mind of man. Time and resources are simply too limited to require agencies to ferret out every possible alternative, regardless of how uncommon or unknown that alternative may have been at the time the project was approved.”)
—Western Energy Alliance

“Under NEPA, agencies must consider and evaluate all reasonable alternatives in a manner that ‘would permit a decision-maker to fully consider and balance the environmental factors.’

“CEQ’s proposed changes would seem designed to signal to agencies that conducting a detailed study and comparison of alternatives is not important. Such a result would hinder the public’s ability to ensure NEPA’s mandated decision-making process has in fact taken place. And it would limit the public’s ability to evaluate and balance the factors and to understand and offer useful comments on better or different approaches. CEQ’s proposal, unfortunately, does not grapple with these anticipated consequences.”
—Natural Resources Defense Council