We all know the feeling—the almost imperceptible drifting off and your body begging you to close your eyes for just a few seconds. OK if you are on your couch or even at your desk, but if you are behind the wheel, it can be deadly. This week is the National Sleep Foundation’s Drowsy Driving Prevention Week®, so today we’ll review some training tips you can offer your company drivers (or your commuting employees) to keep them alert, fresh, and safe while on the road. 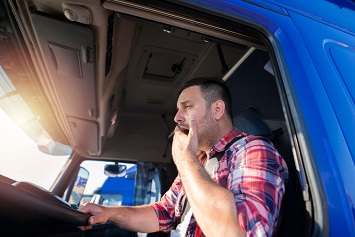 According to the Federal Motor Carrier Safety Administration (FMCSA), large truck crash studies show that a significant percentage of commercial motor vehicle (CMV) drivers were considered to have been fatigued at the time of their crash.

If you employ drivers at your company, your training should include tips to help your drivers avoid fatigue while driving.

From getting enough sleep to avoiding tricks, here are six tips offered by the FMSCA that should be part of training for fleet drivers.

Tip 1: Get enough sleep at the right times. Easy to say, but hard in this world of 24/7 alertness. But getting enough sleep before getting behind the wheel is key to avoiding fatigue. Also, according to the FMCSA, there are certain times of day and night when you should avoid driving, if possible. Your body is naturally drowsy between the hours of 12 a.m. and 6 a.m. and from 2 p.m. to 4 p.m. In addition, a recent study suggests that driving safety-related incidents are highest during the first hour of driving after waking from sleep. So, even if you can’t avoid driving during the “drowsy hours,” don’t rush to the truck when you open your eyes.

Tip 2: Maintain a healthy diet. Skipping meals or eating at irregular times may lead to fatigue and/or food cravings. Also, going to bed with an empty stomach or immediately after a heavy meal can interfere with sleep. A light snack before bed may help you get a more restful sleep. It’s important to note that induced fatigue may cause slow reaction time, reduced attention, memory lapses, lack of awareness, mood changes, and reduced judgment ability. Look for all the help you can get with your diet. Get to know the truck stops along your route that offer the healthiest selections of food.

Tip 3: Take a nap. If possible, you should take a nap when feeling drowsy or less alert. Naps should last a minimum of 10 minutes, but ideally, a nap should last up to 45 minutes. Allow at least 15 minutes after waking to fully recover before starting to drive. Studies show that short naps are more effective at restoring energy levels than coffee. In addition, naps aimed at preventing drowsiness are generally more effective in maintaining a driver’s performance than naps taken when a person is already drowsy.

Also, it’s the law. FMCSA’s driver fatigue rule, found at 49 CFR 392.3, prohibits drivers from driving when ill or tired and prohibits companies from requiring or allowing a driver to operate a commercial vehicle if the driver’s ability to drive is impaired by such things as illness or fatigue.

Tip 5: Recognize the drowsy signals. Indicators of drowsiness include frequent yawning, heavy eyes, and blurred vision. Research has indicated that being awake for 18 hours is comparable to having a blood alcohol concentration (BAC) of 0.08%, which is legally intoxicated and leaves you at equal risk for a crash. According to the FMCSA, a 2005 study suggests that three out of every four CMV drivers report having experienced at least one type of driving error as a result of drowsiness.

Tip 6: Don’t fall for your own tricks. Smoking, turning up the radio, drinking coffee, opening the window, and other “alertness tricks” are not real cures for drowsiness and may give you a false sense of security. You may feel more alert for an instant, but you won’t maintain a necessary level of alertness. In addition, excessive caffeine use can cause insomnia, headaches, irritability, and nervousness. If you must drink coffee to kick-start your shift, be aware that it takes several minutes for caffeine to get into your system and deliver the boost you need. So, if you are already tired when you first drink a caffeinated beverage, it may not take effect as quickly as you might expect. In addition, if you are a regular caffeine user, the effect may be much smaller.

Make sure you have a policy that discourages drowsy driving, and offer training to help your drivers stay alert on the road. Put your drivers on a realistic schedule. It will not only keep them and everyone else on the road safe but will also keep you in compliance and out of court.