Tree care operations are among the most hazardous in the U.S. workforce. Nationally, landscape service workers make up less than 1 percent of the workforce but constitute 3.5 percent of all workplace fatalities, according to the Washington State Department of Labor and Industries, and 75 percent of all fatalities are related to tree removal or tree trimming. The Tree Care Industry Association (TCIA) annually tracks tree-related incidents from media stories and reported the following unofficial fatality figures for the past 5 years: 79 in 2013, 81 in 2014, 87 in 2015, 92 in 2016, and 72 in 2017. 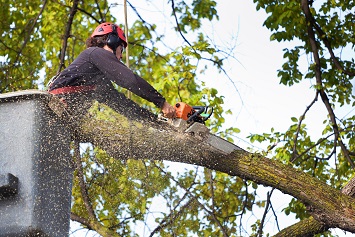 “The ‘Big Three’ types of accident causation are the same as they have been in recent years: fall, struck-by, and electrical contact incidents comprise 31, 25 and 22 percent of the total incidents, respectively,” stated the TCIA in conjunction with its 2016 figures. “The consistently high number of incidents in tree care over the past few years has attracted OSHA’s attention. At the time this report was published, at least 19 states in five OSHA regions were running ‘special emphasis’ programs targeted at tree care and landscape firms.”

There is currently no comprehensive OSHA standard for tree care operations, although a number of regulations apply to various activities and hazards in the industry. Several states have specific tree care safety rules, and a national consensus standard, ANSI Z133-2017, Arboricultural Operations—Safety Requirements, covers common hazards such as falling from trees, being struck by falling trees or branches, chainsaw injuries, wood chippers, and energized power lines.

However, employer compliance with consensus standards is voluntary unless a standard is incorporated in a regulation. In July 2016, OSHA convened a stakeholder meeting to gather information on best practices for tree care worker safety. Based on comments at the meeting, OSHA stated:

“In some cases, employers are close to following ANSI Z133. However, this is not the norm, especially in states that do not have OSHA-approved State Plans. Many employers do not know about the ANSI standards, especially in smaller municipalities, small parks departments, and school districts. A school maintenance employee may take care of a tree on school grounds instead of hiring a contractor with specialized knowledge.”

What Is OSHA Doing?

In May 2006, the TCIA petitioned OSHA to promulgate a federal standard because “tree care work is by its very nature one of the most hazardous occupations” and because existing OSHA standards do not adequately address those hazards. The TCIA urged OSHA to develop a standard based on ANSI Z133.

In 2008, OSHA issued an advanced notice of proposed rulemaking (ANPR) to start the process of developing a tree care standard. The ANPR made it onto OSHA’s regulatory agenda but was later removed because of insufficient resources, only to reappear in recent years. OSHA’s Spring 2018 regulatory agenda calls for convening a Small Business Regulatory Enforcement Fairness Act (SBREFA) panel on potential tree care rulemaking by April 2019.

As noted, tree care employers are subject to federal standards that cover some of the hazards in the sector. OSHA’s logging operations standard (29 CFR 1910.266) covers limited types of tree removal operations that are sometimes performed by firms primarily engaged in tree care services. In addition, there are a number of other OSHA general industry standards that apply to many tree care operations, including standards for ladders; vehicle-mounted elevating and rotating work platforms; personal protective equipment (PPE); portable power tools; machine guarding; and electrical safety-related work practices.

In tomorrow’s EHS Daily Advisor, we’ll take a look at more specific hazards facing tree care workers and steps that employers and employees can take to address them.