The National Institute for Occupational Safety and Health (NIOSH) has released a new virtual toolkit to help first responders reduce their exposure to fentanyl and other illicit drugs. The toolkit provides resources to help keep first responders safe when arriving on a scene where illicit drugs, including fentanyl, are present or suspected to be present. 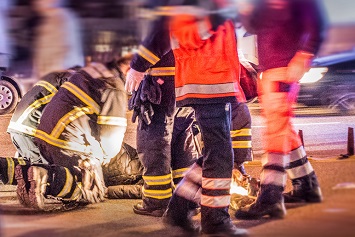 First responders are at risk of inhalation; mucous membrane contact through nose, eye, and mouth; ingestion; dermal and needlestick exposure to illicit drugs.

The toolkit includes two training videos that can be used during for roll call along with infographics and postcards based on NIOSH recommendations. The institute developed the training videos in collaboration with the Fredericksburg, VA Police and Fire Departments, and the FBI Laboratory.

The resources are intended to accomplish three goals:

The institute’s definitions of exposure levels and corresponding PPE recommendations are:

First responders must undergo medical screening, fit testing, and training before using respiratory protection. Most respirators require wearers to be clean-shaven to ensure a proper respirator seal. Nothing should come between the respirator and wearer, including radio earpieces, hats or helmets, glasses or goggles, or ear-mounted cameras.

Users must first don a respirator before putting on other headgear. PPE wearers also must perform user seal checks of respirators before entering a hazardous environment.

After leaving the scene, PPE must be removed and either cleaned or disposed of.