Drivers with impaired vision in one eye could operate commercial motor vehicles (CMVs) in interstate transportation without first obtaining an exemption from the Federal Motor Carrier Safety Administration (FMCSA) under a proposed rule published January 12 (86 FR 2344). The proposed change would end the agency’s vision exemption program. 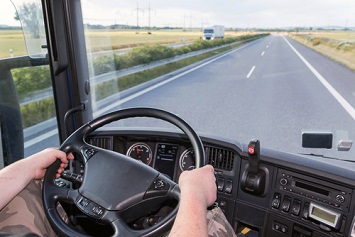 The FMCSA proposed an alternative vision standard for driver physical qualification, which would replace the exemption program. The proposed amendment would permit a driver who cannot meet either the current distant visual acuity or the field of vision standard, or both, in one eye to be physically qualified to operate a CMV in interstate commerce under certain circumstances.

Individuals with vision loss in one eye can and do develop compensatory viewing behavior to mitigate the vision loss, according to the FMCSA. Under the proposed alternative vision standard, a driver must meet the following conditions:

A driver physically qualified for the first time under the alternative standard would have to complete a road test before operating a CMV in interstate commerce. Motor carriers would administer the road tests following FMCSA requirements.

Drivers physically qualified for the first time under the proposed alternative vision standard could operate in interstate commerce after completing the road test but without first having to meet the exemption program’s current requirement of 3 years of intrastate driving. Drivers who have 3 years of intrastate or excepted interstate CMV driving experience with a vision deficiency, hold a valid federal vision exemption, or are grandfathered under 49 CFR §391.64 for participation in a vision waiver study program would be exempt from the road test requirement.

The FMCSA and its predecessor agency, the Federal Highway Administration (FHWA), have continuously monitored the impact of the vision waiver study and exemption programs.

Individuals who have developed the skills to adapt to and compensate for the vision loss once it has been deemed stable by a medical professional should be given the opportunity to demonstrate the skills to operate a CMV safely in a road test administered by a motor carrier and drive in interstate commerce, according to the agency.

Comments are due to the FMCSA by March 15.