On Monday, three news releases from OSHA covered recent enforcement actions. Two of them were taken against construction companies that failed to protect employees from trenching hazards, and one of the enforcement actions was unfortunately taken only after two employees were killed. 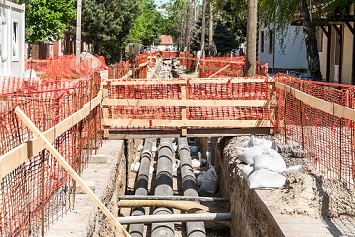 “This company has once again put their employees at serious risk by failing to provide training and implement required trenching protections,” said OSHA Area Office Director Diego Alvarado, in El Paso. “Unprotected trenches can be fatal and it is fortunate that no one was injured.”

El Paso Underground Construction has 15 business days from receipt of the citations and penalties to comply, request an informal conference with OSHA’s area director, or contest the findings before the independent Occupational Safety and Health Review Commission.

OSHA inspectors determined that a section of a concrete highway barrier collapsed on the two employees as they removed a storm drain system. The Atlanta-based company faces $33,259 in proposed fines, including the maximum penalties for exposing employees to struck-by hazards by allowing them to work near a concrete barrier that was not shored, braced, or underpinned; and allowing employees to perform trenching work in an area that was not inspected for hazards. The investigation was part of OSHA’s National Emphasis Program on Trenching and Excavation.

“Trenching and excavation work is especially dangerous when appropriate protective systems are not used,” said OSHA Fort Lauderdale Area Office Director Condell Eastmond. “This tragedy could have been prevented if the employer had ensured that adjoining structures were shored, braced, or underpinned to avoid a collapse.”

Archer Western Construction Inc. has 15 business days from receipt of the citations and proposed penalties to comply, request an informal conference with OSHA’s area director, or contest the findings before the independent Occupational Safety and Health Review Commission.

It is not surprising to see trenching citations dominating construction enforcement, as OSHA has stated that one of its priority goals for 2018 is to reduce trenching and excavation accidents. To avoid citations and ensure that your employees are kept safe while on the job, ensure that your construction company is aware of ongoing enforcement as well as best practices and guidance for mitigating the risks and hazards that accompany trench work.