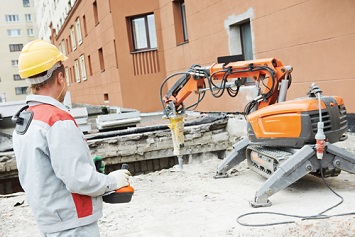 The hazard alert was developed by Washington’s Division of Occupational Safety and Health and Fatality Assessment and Control Evaluation (WA FACE) Program.

One worker was repositioning a machine when he bumped the remote control against the machine. The machine moved, pinning him against a wall.

The machine was fitted with a shear attachment to demolish an HVAC system, and the worker wore a waist-mounted remote controller connected to the machine by a wire. The worker had not put the machine into emergency stop mode before repositioning it.

He tried to free himself but lost consciousness. After multiple attempts, coworkers were able to rescue him, but the worker’s chest was severely crushed, causing him to be out of work for several months.

An experienced construction worker suffered broken bones and nerve damage when a demolition robot crushed his foot. The worker on a generator installation project stood in a tight spot between the machine and an excavation wall.

The operator was using a machine with a breaker attachment to chip concrete. When he tried to apply more pressure on the tip of the breaker, the front of the machine rose up off the ground, suddenly shifted forward, and came down on his foot.

OSHA May Add Robotics to Lockout/Tagout

The federal Occupational Safety and Health Administration (OSHA) issued a request for information this week on robotics safety. The agency may propose adding requirements for robotics safety to the control of hazardous energy (lockout/tagout) standard. Human-robot interactions have increased and include robotic exoskeletons worn by workers. OSHA is not the only federal agency examining robotics safety.

The National Institute for Occupational Safety and Health (NIOSH) created the Center for Occupational Robotics Research to research benefits and risks and develop guidance for safe human-robot interactions. NIOSH just signed a memorandum of understanding with North Carolina State University for collaborative research into robotics safety.

WA FACE is partially funded by a NIOSH grant.