California Assembly Bill 2954 (AB 2954) proposes unique legislation to reduce greenhouse gas (GHG) emissions from “working lands” (including agricultural, grazing, and forest) and “natural lands.” Additionally, the bill seeks to implement carbon sequestration programs on the lands that would be regulated by the bill. 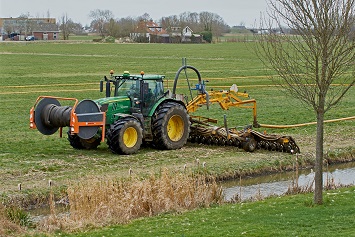 “Carbon dioxide (CO2) is the most commonly produced greenhouse gas,” according to the U.S. Geological Survey (USGS), the scientific arm of the Department of the Interior. “Carbon sequestration is the process of capturing and storing atmospheric carbon dioxide. It is one method of reducing the amount of carbon dioxide in the atmosphere with the goal of reducing global climate change.”

The USGS is conducting assessments on two major types of carbon sequestration: geologic and biologic.

So, why focus on an industry that produces relatively low amounts of GHG emissions compared with the industrial and transportation industries?

“Agriculture is the one sector that has the ability to transform from a net emitter of CO2 to a net sequesterer of CO2—there is no other human-managed realm with this potential,” according to the Carbon Cycle Institute. “Common agricultural practices, including driving a tractor, tilling the soil, over-grazing, using fossil fuel-based fertilizers, pesticides and herbicides result in significant carbon dioxide release. Alternatively, carbon can be stored long term (decades to centuries or more) beneficially in soils in a process called soil carbon sequestration. Carbon farming involves implementing practices that are known to improve the rate at which CO2 is removed from the atmosphere and converted to plant material and/or soil organic matter.”

If passed, CARB would be required to set GHG emissions reductions and carbon sequestration targets on the state’s working and natural lands by January 1, 2023. The bill calls CARB to identify policies and practices to achieve its objectives, along with tracking methods for the state to monitor progress.

As an example, some carbon sequestration practices include mulching fields, reducing tillage, and planting ground-cover crops. If the bill were to be passed, these types of measures and others would be included in CARB’s updated Scoping Plan (the document outlining the agency’s climate change policies).

A multiagency, multifaceted approach will probably be required to implement AB 2954.

Criticism from both Republicans and Democrats about the bill is that CARB would be granted too much power over the forestry and agricultural industries. Those industries fall outside of CARB’s current scope and expertise. Some Californian legislators have called for changes to the bill to shift some of this regulatory power to the Natural Resources Agency and/or the Department of Food and Agriculture. Agricultural industry groups have expressed doubt that CARB will be able to enforce the requirements and concern over the bill’s rapid speed through the legislature.

The Senate’s Committee on Environmental Quality passed the bill to the Senate Appropriations Committee on August 14, 2020. The Appropriations Committee placed the bill status as “under submission,” which likely means it will not proceed further during this legislative session. However, there are continued discussions about passing the bill or similar measures in the next legislative session, which begins January 2021. California has stated a goal of achieving net-zero GHG emissions standards statewide by 2045, meaning measures such as those proposed by this bill must be incorporated by the state’s legislature.

Many states, including California, are taking a close look at nature- and land-based mechanisms for sequestering and reducing GHG emissions. This bill could serve as a model for similar bills. Forestry, agribusiness, landowners, and other impacted parties are advised to follow this legislation and other actions by CARB.